Skip to content
Vodos are must for certain religious and festive preparation in North Kanara . Vodos are small round shaped discs made from urad dal flour and rice flour. In North Kanara there is a custom of preparing vodos during Ganesh Chaturthi celebrations in every house irrespective of whether they place the idol at home or not .The other religious functions when vodos are prepared are during Navaratri(mhanami in Konkani) and ” Deva-jevan ” which is a pre wedding ritual. Some families in South Kanara too have the deva-jevan ritual where vodos are prepared and served with payasu(dessert) famously called as vodo payas/ras vodo
As Ganesh Chaturthi is nearing I thought of sharing this recipe in our blog with measurements taken from my Amma.I have very fond memories of having Vodos with mooga ghashi(green gram /mung is very auspicious in North Kanara and ghashi is always there in the menu) in my paternal grand parents home when we used to visit during ” Chowthi ” as kids.Though at my In-laws place we don’t have the tradition of bringing the idol , I love to prepare all delicacies which are meant for preparing during Ganesh Chaturthi/Chowthi so that my daughter too can enjoy.Do try this authentic traditional recipe whenever possible.

Ingredients:-
Method:-
Here is the pictorial for the various stages 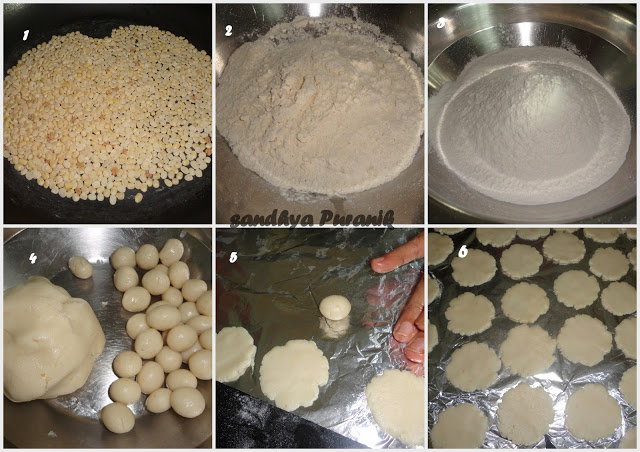 Vodos are prepared a week before in large quantities and stored in an air tight containers / barrels and are distributed as prasad for all those who come to have darshan of lord Ganesh at my paternal home.The size of the vodos depends on the quantity they need. Some prefer it very tiny while some prefer the size as shown above.The vodos if patted into very small thick roundels puff up when deep fried like the pani puris.If patted slightly bigger and thin they dont puff up much and are slightly on the flatter side.You can also pat them bigger and thick so that they puff up if you prefer.We personally at home prefer slightly bigger and flatter as they are easy to store and dont get crushed while storing and are also easy to carry while travelling.Whatever the shape and size of vodos…the main criteria is they should turn crispy…doesnt matter if they doesnt puff up at all or some puff up and some don’t.
Vodos are made in small quantities daily for Naivedya too along with chakkuli.