Skip to content
The festival of Tayi or Hartalika Tritiya falls on the third day of Shukla paksha of the month of Bhadrapad, a day before Ganesh Chaturthi or Chavathi.  Mother Goddess Parvathi or Gauri as she is also called  – is the mother of Lord Ganesha and hence worshipped a day prior to Chavathi. Also known as Gauri tritiya or Vayana Pooja it is a festival which runs as a hereditary ritual  only in certain families in South Canara and   North Canara .  Those who don’t have it as custom  consider it as a blessing to receive the Vayana !   It’s considered a holy and auspicious occasion for married ladies or ‘Savashini / Sumangalis ! Sometimes assisted by priests –  they perform it to seek the Mother’s grace and benedictions for progeny and also for  longevity of the husband, .
A few days prior to Vayana Pooja, coconuts are dehusked and cleaned thoroughly. The number of coconuts used in the pooja is always in odd numbers the minimum being 5 and no limit to the maximum. Two days prior to the Vayna Pooja, kajal which is used to anoint the coconut is prepared at home. A plate containing water is placed on a lamp lit with pure ghee and the carbon formed is collected by scraping it off with a knife. A drop of ghee or pure castor oil is added and kajal thus prepared.
A day prior to the pooja, women have a bath including washing their hair , and the more orthodox  do so without partaking any food  too before anointing the Vayana . A no-garlic -no onion diet  is followed by all during these days . The coconut is washed in turmeric water. Two of the holes in the coconut are anointed with kajal and the third one with Kumkum. . Also some kumkum is mixed with oil and lips are drawn with it  A line is  drawn with chalk running  through the centre of the coconut. some mark it with dots and some with black beads stringed on a thread . All the coconuts are thus kept ready in preparation in the deva kuda or a secluded corner in the house.
On Vayana Pooja day  a portrait of Lord Mahesh & Godess Gowri ( in the ancestral home only ) is kept on a Poleru ( Plate )along with veedos (betelnut leaves ) , flowers , kumkum , cucumber , a piece of sugar cane and  a sheaf of paddy (Bhaatha )! Then the elder of the house will carry it in his head and circumbulate  (go around ) the tulsi plant.. Another elder will mix kumkum & haldi in water in a small plate  and wave it before the Gods  ( Latti Udak Uvalche ). Then they are brought into the puja room and seated , Kumkum is applied to Goddess Gowri’s forehead as a bindi and kajal to her eyes .Also bangles are kept by her side with the help of a stick, and the portraits  decorated with flowers ! In front of  them  banana leaves are spread in a line in the pooja room. A handful of rice is put on the leaf, and the decorated coconut  (Vayana ) is then placed above it. A lamp or diya  ( usually of  silver or clay  filled with ghee or oil ) is then placed above it . .This pic is courtesy my friend  – Veena Mallya and Co-author of this blog

Tamboola, flowers, banana and a piece of sugar cane is placed beside each of the Vayanas. Along side all the Vayana is placed a large fresh cucumber, haldi, kumkum, sindoor, and the Vayana daru or a multi coloured thread with  5 tiny black beads woven in between as in the pic below !

A lot of flowers like  shenvthi ( marigolds ), mogarein (Jasmine ) and bhingoru ( arecanut flower fronds ) are also used . Traditionally Chane  Panchakdayi, Cheppi kheeri, Cheppi bhajji are  offered as  Naivedya ! According to folk- lore Gauri had forgotten to add salt to both the kheeri and bhajji. and hence to this day these dishes are made  without salt ..The naivedya is placed in front of the Vayana, all the lamps on them are lit, the shlokas , the sixteen names of Gauri  are recited and agarbathi and aarthi waved to the Vayanas. then they go around it (circumbulate ) and bow ( Namaskaru ). While making patholis for Naivedya – 5 of them are made without salt and in one of them a coin is kept .
Those staying away from the ancestral home & who are unable to participate  – too celebrate in a small way at their own homes . A kalash is filled with water , little kumkum , haldi  , a flower petal & camphor , On it 5 mango leaves are kept and then a coconut is kept  and placed on a small mound of rice .It is  adorned with  flowers and a chain &bangles too . Here only Godu phovu is made for naivedya . A minimum number of 5 vayanas are placed  and offered pooja .
This pic is courtesy of my FB friend –  Asha Radhakrishna Shenoy  & co-author of this blog

The lady performing the pooja then ties the Vayana daru around her neck along with the mangalsutra  and the earlier one removed . Some keep it in a small gold box along with the mangalsutra to wear it for the whole year  . Two of the Vayanas are then kept aside for the Kuldevatha and the kuldevi of that particular household. Then first vayna is given to a Brahmachari ( Brahmacharika vaina)  .The next  two is always given to the mother along with the lit Vayanas. The Vayanas are always given into the hands and not the saree Pallu ( Honthi ) with the Vayana facing the giver . The one who receives it should be sitting down .Not to forget the husband ! ..he is also given one and his blessings also sought by touching his feet ! If the pooja is conducted by a bhatmaam ( purohit ) then he also receives one .
Ladies  who have both parents and in-laws living are the lucky ones  who are then given the Vayana also called ‘jallelein Vayana’ (vayana with diya ). The diya should face the giver . The remaining Vayana is given to the elders and other suhasinis in the family who have been invited for the pooja. Vayana distribution outside the house is not done on that day. From the next day onwards  it begins and is to be completed before Nopi or Ananth Chaturdashi though some do continue giving till Punnav. They should be given out before the coconuts dry out ! In some families the eldest daughter-in law  will add the number of  Vayanas  of her late Suvasini  mother-in-law too  to her own !! After offering pooja to all the vayanas , she  will distribute them among her elders & other married  women.
During Visarjan at night , the portraits are taken to the tulsi plant .A small hole is made in the soil and the  salt-less patholi along with the   “Kanik ” is  buried in it . Then the  next day  the portraits and the old Vayana doru are  dropped into a well or in a river or flowing water nearby !
The first Vayana puja  for the bride  is usually immediately after the  marriage in the hall itself after all the other rituals are over  ! This is if the bridegroom’s family has the tradition of Vayana puja .

This pic is courtesy my FB friend Soumya Pai K   of her first Vayana puja!

A 101 coconuts are kept as Vayanas & offered pooja . Then these are given to the women guests one by one by the bride and gets blessed by touching their feet . This time the mother-in-law receives the lit  vayanas first . Then it is given to the bride’s mother and then to the women who have both their parents & in-laws alive ! Rest to all the married women ! All other times the mother always receives the first vayana from her daughter ! Only after this ritual is over can the newly weds partake of the wedding feast !
After the wedding   for the first Vayana Pooja  all the coconuts and other materials required  for the pooja  is sent  from bride’s home every year.! Nowadays when people are  living far off , only the money required to buy these materials  is sent..
Lunch  for all the women attending the pooja is as per choice of that particular household and is not as elaborate as that during Chavathi. Usually if the late  mother in law was a suvasini – a keli panna jevan is also symbolically given to her  and all suvasinis too  !
Here is a typical jevan  for Vayana pooja ! 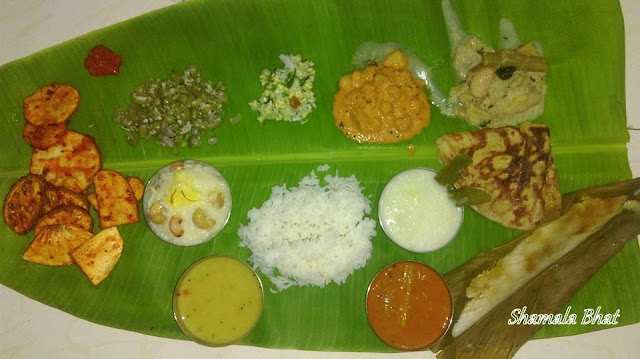 Vayana Jevan  –  Jeev kadagi, Phagila , Nendra bale, Kanagha phodi’s, beans upkari,,, Chana ghashi , Gajabaje, Ambat , Kosambari, Cheppi kheeri, Patholi, Dalithoy, Kolambo , DoodhPak, sheeth, ,  Ubbati  & nonche . Night dinner will be only phalar ie is without rice .
The significance of this pooja is to symbolically rever the Mother Goddess and the mother in a family and to give  respect & gratitude to all the women of a family .
This post has been compiled with inputs by members of our FB group KKAJ ! . Thanks to you all especially  friends and my co-authors ! There may be variations from family to family ! We have just detailed in a general way ! Hope this will help you and the future generations to keep  up this  great tradition !