Be it a simple meal of  rice & dal or a grand feast of many dishes – Pappads or Happollu / pappadu as it’s called in Konkani forms an integral part of an Indian meal . This pappad provides both protein and the desired crunch in every meal . GSB’s families have always made this pappad at home for their own needs . In a large family with many members & kids – the women got together on a sunny day kneaded , rolled out and dried them to store in large tins .Kids being given one and adults being given two was the norm in those days . These days however all have to their heart’s content ,
In this new age of nuclear families and working members – this art of pappad making is slowly dying out . except for a very few who still make it in their homes ..many of us resort to buying from shops as many of us don’t know how to make it . But those who make it at home will vouch that market ones are nowhere near the taste of home made ones .
An enthusiastic friend of mine Anasuya V Prabhu has revealed the secret of pappad making to me ..sharing her recipe  – 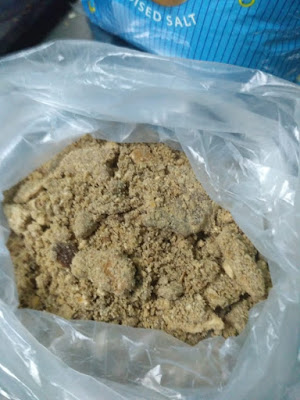 Mix the pappad khar , salt & water in a vessel .

Heat and bring to a boil and switch off , no need to boil it further . Cool and store in a clean bottle . You can store this mixture for a long time ,,so you can prepare pappads as when you want  .

Now mix one cup of Udid dal powder with a little less than half a cup  ( two ladles  as shown in the pic ) of the prepared pappad khar solution and the tsp of  oil  to form a  dough .

Now this dough has to be kneaded to soften it . Usually it is pounded in a grinding stone or beaten with an iron rod or any heavy object – all the while kneading it – so that we get a rubber like  dough  which will not break when pulled . 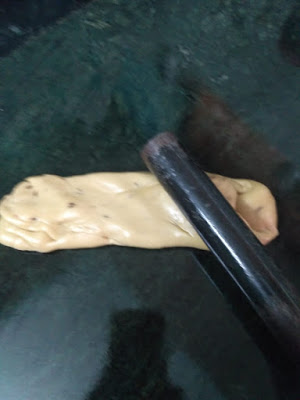 A little more oil can be added if the dough seems dry. Roll the dough into thin long tubes like in the pic below . 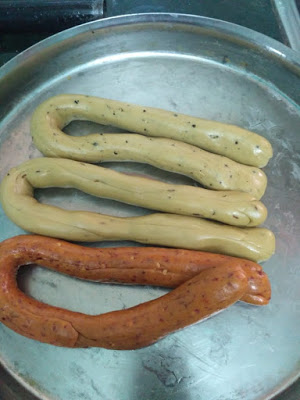 Now cut with a knife into small pieces . 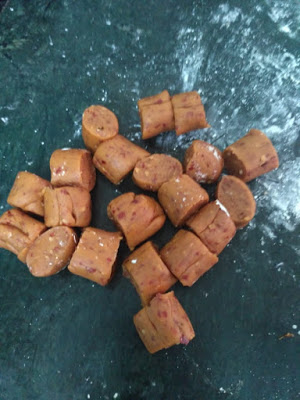 Now dust these rounds well with   udid dal powder and make piles of 7 to 8 of them . 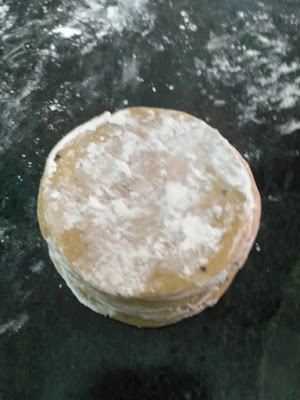 Now roll them out carefully  to bigger rounds with a rolling pin , 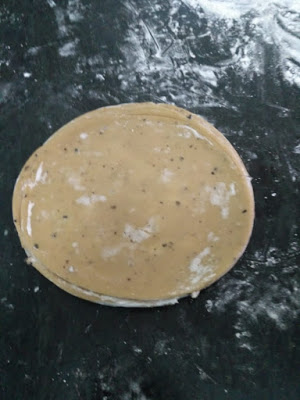 Separate them and spread to dry on a plastic sheet or thin cloth to dry under the hot sun.

Collect the pappads when they have just dried and stack them,They should not be left out in the sun too much as they will otherwise become brittle .So do not dry them too much .Drop them one by one in hot oil and watch them swell out . Enjoy with a meal or just as a quick bite !